I highly recommend this article:

In Albrecht’s view, the residents of the Upper Hunter were suffering not just from the strain of living in difficult conditions but also from something more fundamental: a hitherto unrecognized psychological condition. In a 2004 essay, he coined a term to describe it: “solastalgia,” a combination of the Latin word solacium (comfort) and the Greek root –algia (pain), which he defined as “the pain experienced when there is recognition that the place where one resides and that one loves is under immediate assault . . . a form of homesickness one gets when one is still at ‘home.’ ” A neologism wasn’t destined to stop the mines; they continued to spread. But so did Albrecht’s idea. In the past five years, the word “solastalgia” has appeared in media outlets as disparate as Wired, The Daily News in Sri Lanka and Andrew Sullivan’s popular political blog, The Daily Dish. In September, the British trip-hop duo Zero 7 released an instrumental track titled “Solastalgia,” and in 2008 Jukeen, a Slovenian recording artist, used the word as an album title. “Solastalgia” has been used to describe the experiences of Canadian Inuit communities coping with the effects of rising temperatures; Ghanaian subsistence farmers faced with changes in rainfall patterns; and refugees returning to New Orleans after Katrina.

The Rising Waters artists loved the food and the spirit of Shuna Lydon.  So glad to see her celebrated online by the NY Times.  Click here for story, recipes and slideshow. 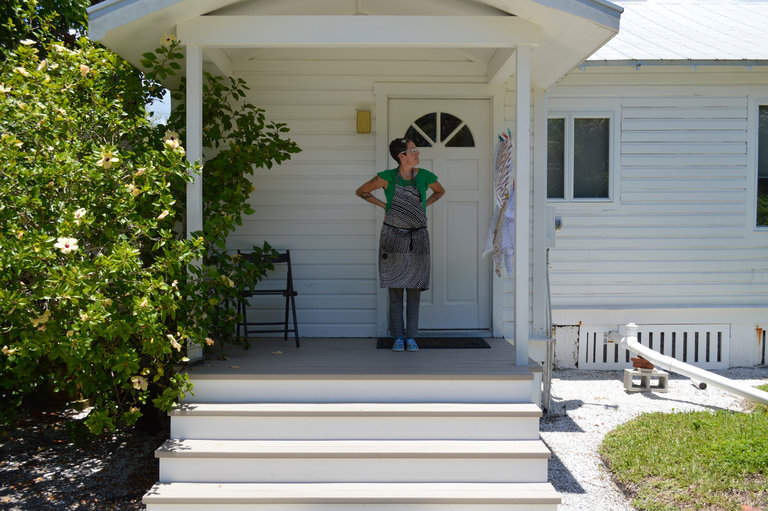 Short interview with the filmmaker that expresses a perspective that seems well worth considering! Cheers.

HBO:  How would you describe the message of How to Let Go of the World?

JOSH FOX:  I thought I was making a film about climate change, and then in the middle of it I ended up making a film about the stunning revelation that it’s sort of too late to stop a lot of what we think about as climate change. That we have to refocus our dialogue to be about humanity as we progress through the most difficult period of change that we have ever seen. Do we want to be known as the moment in history that was incredibly violent, that was incredibly insensitive, that created wars, starved huge sections of the population, was selfish, and was racist? Or do we want future civilizations to look at this moment as the time we completely changed the way our civilization operates?

Click here for Trailer.  Can watch on HBO-GO, HBO-NOW and HBO itself

The ethical principles below were used by the Isle de Jean Charles band of Biloxi-Chitimacha-Choctaw Tribe – Lowlander Center for its re-settlement proposal.  Here is the vision statement by the Tribe: http://www.coastalresettlement.org/the-vision.html

Given that the current and potential impacts of climate changes are generating environmental and social processes that will displace large numbers of people, forcing them to migrate as individuals and families or permanently displacing them and/or relocating them as communities (IPCC 2014).

And given that displacement and resettlement are extraordinarily complex processes that to date have not been carried out well, and have in fact, resulted in the increased economic and social impoverishment of affected communities (Cernea 1997; Scudder 2009). Resettlement brings together a wide range of cultural, social, environmental, economic, institutional and political factors that both transpire in proximate time frames and intertwine, influencing each other and compounding the complexity. Therefore, understanding the complex nature of the emerging system of a resettlement project requires a more comprehensive and open-ended approach rather than a purely economic and operational perspective that has informed the majority of resettlement projects (de Wet 2005).

And given that the recent UNFCCC Conference of the Parties in Paris in November 2015 brought to the fore the imperative to link science and policy to morality.   This global public recognition of morality as a third component of the strategy we must engage to deal with climate change is critically important (Lazrus and Marino 2016). These three components are equally essential for developing appropriate practices, particularly for people who are confronting the challenges of displacement and resettlement by climate change effects of climate change associated disasters. There is a moral-ethical obligation to assist displaced people and to improve our resettlement policies and practices for that purpose.  Most importantly, our discussions about resettlement must be informed by a moral code that is fully embedded in the culture of affected people.

And given that the displaced have suffered some form of violation of their basic human and environmental rights. They have been uprooted against their will and their communities have been destroyed or made uninhabitable by social and/or ecological forces. United Nations covenants and conventions establish the human rights to health, a decent existence, work and occupational safety, an adequate standard of living, freedom from hunger, an adequate and wholesome diet, decent housing, education, culture, equality and non-discrimination, dignity, and harmonious development of the personality, the right to security of person and of the family, the right to peace and the right to development. (United Nations Universal Declaration of Human Rights 1948).

We propose the following assertions and principles to provide a basis for the development of policies that will guide and produce effective, developmental and humane resettlement projects for people affected by climate change effects and associated natural hazard triggered disasters.

The task that uprooted peoples and those who would support and assist them face is to reconstruct self, family and community, both in the form of material structures and processes and in their social and cultural expressions.   The most pressing need at this juncture is achieve a greater balance between addressing the material needs of displaced communities and acting in a way that supports, rather than undermines their struggle to reconstitute the social bases of their communities. The wreckage from uprooted communities around the world is as much due to poor policy as it is to the many forms of uprooting and violence to which they have been subjected (Oliver-Smith 2005).

Resettlement projects must be developed that enable people to materially sustain themselves while they begin the process of social reconstruction. Resettlement projects must be designed to further, rather than impede, the process of community reconstitution.   However, if the level of impoverishment experienced by most resettled peoples is any indicator, even adequate systems of material reproduction are beyond either the will or the capabilities of most contemporary policy makers and planners.

Downing, T and C. Garcia-Downing 2009 “Routine and Dissonant Cultures: A Theory about the Psycho-socio-cultural Disruptions of Involuntary Resettlement and Ways to Mitigate Them without Inflicting Even More Damage, In Development and Dispossession: The Crisis of Forced Displacement and Resettlement edited by Anthony Oliver-Smith, Santa Fe: SAR Press. Pp.225-254

Scudder, Thayer. 2009. “Resettlement Theory and the Kariba Case: An Anthropology of Resettlement,” In Development and Dispossession: The Crisis of Development Forced Displacement and Resettlement, edited by Anthony Oliver-Smith, Santa Fe: SAR Press. Pp.25-48.

Anthony Oliver-Smith is Professor Emeritus of Anthropology at the University of Florida. He is also affiliated with the Center for Latin American Studies and the School of Natural Resources and Environment at that institution. He has held the Greenleaf Chair of Latin American Studies at the Stone Center for Latin American Studies at Tulane University(2008) and the Munich Re Foundation Chair on Social Vulnerability at the United Nations University Institute on Environment and Human Security in Bonn, Germany(2007). He has been awarded the Bronislaw Malinowski Award of the Society for Applied Anthropology for 2013 for his lifetime achievement and work in disaster studies and resettlement research. He has done anthropological research and consultation on issues relating to disasters and involuntary resettlement in Peru, Honduras, India, Brazil, Jamaica, Mexico, Japan, and the United States. He has served on the executive boards of the National Association of Practicing Anthropologists and the Society for Applied Anthropology and on the Social Sciences Committee of the Earthquake Engineering Research Institute. He is also a member of La Red de Estudios Sociales en Prevención de Desastres en America Latina and is on the editorial boards of Environmental Disasters, the International Journal of Disaster Risk Reduction and Desastres y Sociedad. He is currently a member of the scientific committee on Integrated Research on Disaster Risk of the International Council for Science and the Climate Change Task Force of the American Anthropological Association.

All this week, Chris Hayes is presenting stories about the rising sea levels.  Last night he presented the story of Isle de Jean Charles, Louisiana.  The first American town to be official abandoned due to rising sea levels.  Here is a Rising Waters post on the island.

Here are more videos on regarding Jean Charles.  http://article.wn.com/view/2016/05/03/Isle_de_Jean_Charles_Resettlement_Plan/

In collaboration with Greenpeace, world renowned italian pianist and composer Ludovico Einaudi has performed a historic concert, set on a floating platform in the arctic ocean. against the icy backdrop of the wahlenbergbreen glacier in svalbard, Norway, Einaudi has played one of his own compositions ‘elegy for the arctic’ for the first time. a monumental early retreat of sea ice as a result of climate change allowed for the construction of an artificial iceberg made from more than 300 triangles of wood, on which a grand piano sits.